Multimedia Center Mala station as a new cultural place within the National Gallery of Macedonia , in the structure of modern Skopje has a specific historical background , which connects different characteristic times .

In chronological terms , the object which is popularly known as “Mala Stanica” is part of the recent history of the construction of Skopje , in particular , comes from the period between the two world wars . As part of the campaign for the construction , rehabilitation and renovation of certain railway stations and other facilities for the railway in 1922 was added onto ” tesnolinejkata ” that the station “Upper Skopje ” , commonly known as “Mala Stanica” by Gorce Petrov, supposed to allow connection of Skopje Ohrid and Struga . Due to the needs for smooth functioning of “Little Station ” at that time will be built and a number of associated objects : toolbars , warehouse etc. . , A function of its proper maintenance. One of those objects is the object now known as “Little Station”, built in 1924, which represents one of the last such facilities in this part of Skopje .

In the period after 1945 , this building housed the military content of the then JNA , which due to their nature , will remove the object of public attention for a longer period of time . After the breakup of Yugoslavia and the withdrawal of the JNA , the building was dedicated and intended for realization of cultural content , although from 1991 onwards , in the absence of specific investments, the building was put into full construction and architectural shape to allow its conversion the appropriate ” cultural center ” to promote and affirm cultural events in the city .

In the period after 1994 were realized several cultural events and projects . It’s initiatives to “private theater ” , when in the space of ” small station ” promoted the idea of ​​” cultural center .” During the 1994-1996 year , the building was carried out several international projects OSI Center for Contemporary Arts .

In 2003 , the Ministry of Culture takes the obligation to complete the facility as a multimedia center at the National Gallery of Macedonia . From that moment until the day of the opening of the facility on November 3, 2005, were made ​​and implemented new projects and actions for adaptation and conversion of space . 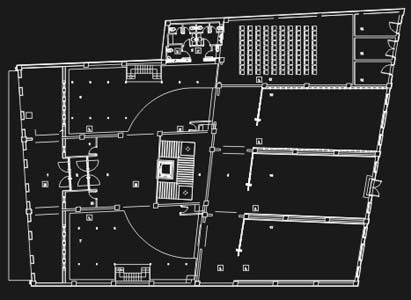 New works for interior and functional adaptation of the space are derived according to high standards of gallery operations , with emphasis on multi- functionality of the facility. The current 2,000 m2 of Multimedia Center “Mala Stanica” enables the realization of high-quality museum – gallery complex content and multimedia projects , making this facility definitely is one of the few of its kind in our country .

There is a fundamental reason why it finally putting into operation of this facility . Although relatively unobtrusive by its architectural conception , which is derived from its original utility function object ” small station ” , from today’s perspective is part of a specific legacy not only in our country but especially in the world of many causes and currently engaged in deliberation continue its function and life .

In fact , it’s entertaining and putting into operation of the so-called ” Industrial Heritage” , which according to international reference documents and guidelines is a specific category of cultural heritage which should be taken and a mode of conduct and specific terms of usage.